Answer of the fourth dimension ends

yeah ! back after a little gap

I recently(a bit long) watched a movie named "Horton hears the Who!". 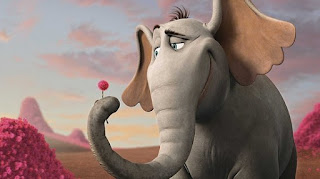 It is a 2008 CGI-animated film based on a book of the same name.The flim was about the creatures inside a small dust speck (a tiny dust particle) in the hands of an elephant, Horton.Horton lives in a jungle named Nool. His funny activities is always a treat to watch and laugh. And his efforts to tell about the sounds he hear from the speck and the people inside it (Mayor ,his son,etc) to his friends and others creatures will look more hilarious than any. His efforts to save the upcoming disaster to the speck and to place it in a safest place in the jungle ( top of Mt. Nool) is the climax. At last the camera zooms out, revealing that along with numerous other worlds in our universe is just one speck among numerous others like our planet.

Lets come to the point !
It was Question in my mind for a long time. The passion for this started because of my 'Aspire-maths teacher' Devarajan in XII std.The concepts of dimensions.Assuming if a all dimensional ( 1D, 2D,3D ) creatures exists in this world.One dimensional ( 1D) creatures will not be able to see the 2D creatures (may be those will be Alien as we call it now) as their body and eyes will be fixed to one dimension space. Similarly 2D creatures will not be able to see the next dimensional creatures (3D) as their body, intestine,mouth, eyes will be fixed to two dimension(2D) space.If you extend this concept I believe that there may be fourth dimensional people whom we can not see but can feel.This imagination may branch to various things like
After seeing a video the search for the fourth dimension ends because its about Tenth dimension (I got it from krirthika akka'z blog)

As I am getting old 😋, it seem like I can not remember many of my earlier tech encounters. This is the place I was logging so that I refer ...

count++ It's not just counts; It Records too.